The Jersey Beats - Oh What A Nite! 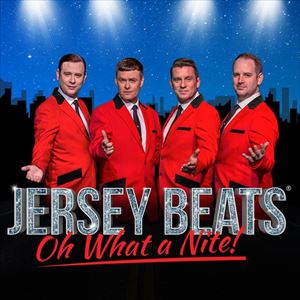 All The Jersey Beats - Oh What A Nite! performances

Starting at 7:30pm, the show runs in 2 halves, with a 20 minute interval. Each half is a minimum 1 hour, 20 minutes in length with the show finishing at approximately 10:30pm.

All are welcome – young and old, but we would like to remind patrons that children are admitted at parent’s sole discretion.

Strobe lighting and pyrotechnics are used during this performance.

It’s THE sensational show celebrating the music of Frankie Valli & The Four Seasons!